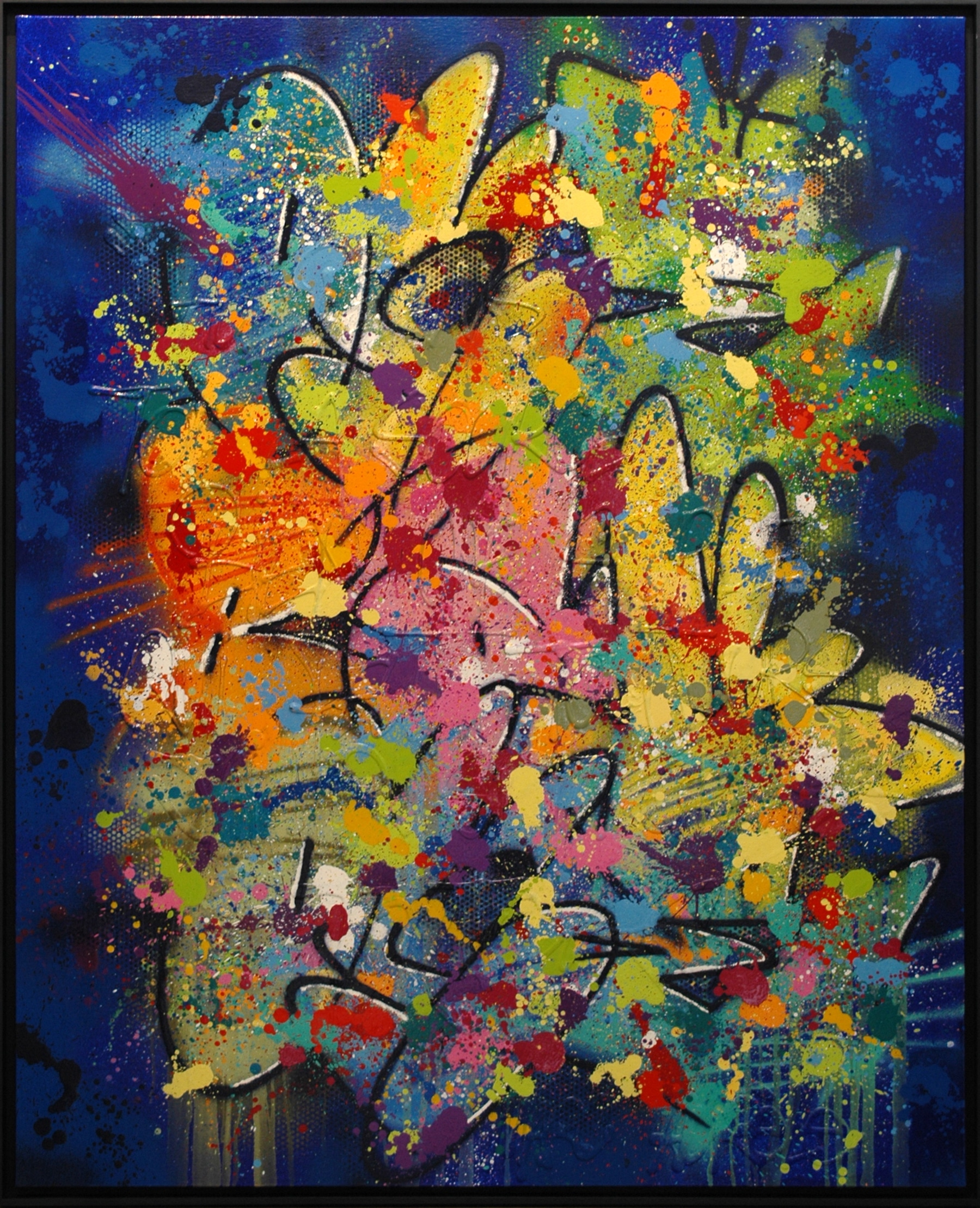 With Nebay, the shapes blend into the background from which they suddenly seem to emerge to give way to hidden lettering. Optimistic messages coo with acidic compositions; typography coexists in perfect balance with numerical symbols. Nebay has taken her bearings in the street, a characteristic for which it will come as no surprise to find in his canvases the spontaneity and élan that are characteristic of urban artists. The individuality of the curves, glorified by such bright colours, calls for reflection or a smile. He explodes the colours with force and mastery to create what he calls “his colourful carnage”.
Faced with Nebay’s works, emotions are inevitably solicited. Some people squint, others stand back and try to capture the smallest details of a composition that seems to have neither beginning nor end. Portrait formats would be just as appealing in landscape. Behind this abstraction, however, there are well thought-out forms, floating lettering that reveal the artist’s graffiti, his signature and his name: Ben alias NEBAY. A hymn to colour, the eponymous graffiti is adorned in red, orange, pink, blue, green… Charged with a singular energy, Nebay’s paintings are a real well of energy, some visitors enter the galleries attracted by the dynamism of the artist just to contemplate these works. It is not uncommon for these same visitors to return the same day to fill up with positive energy in front of his paintings.

Nebay explains his passion for street painting as follows: “In my opinion, any writing, whatever it is, is proof of reflection on the consciousness of life…” Considering himself as a homo-sapiens of modern times, graffiti is for him nothing more than the logical evolution of cave paintings where caves would have given way to city walls that he finds too gray. This is how he frees himself from all constraints, claiming his right to expression in an environment that belongs to no one but everyone.
He puts all his heart into his urban paintings because he knows that they are doomed to disappear. From the streets to the chic galleries of the Place des Vosges, he has made his mark on the walls of Paris, Lyon, Shanghai, Rome…
It is in the Kremlin-Bicêtre, his hometown, that he leaves his first traces and where he will set up his workshop in a former 80 square metre technical room which will serve as a playground covered with dripping and calligraphy of all kinds where the ground is a large-scale draft.

Recently, Nebay has been reinventing itself again by offering double-entry canvases. Not very dictable at first glance, Nebay’s new works conceal a clearly written message that must nevertheless be noticed. Sister Emmanuelle, Goethe, Marc Aurèle…as many inspirations as Nebay puts into painting. The sentences written in relief under the layers of spray added to the volumes of his calligraphy give the impression of a 3D work, a work that generously comes out of the frame.
Well hung on the walls of art galleries and collectors, it is very present at auctions.
Nebay wants to propose a simple and efficient painting: a successful bet.