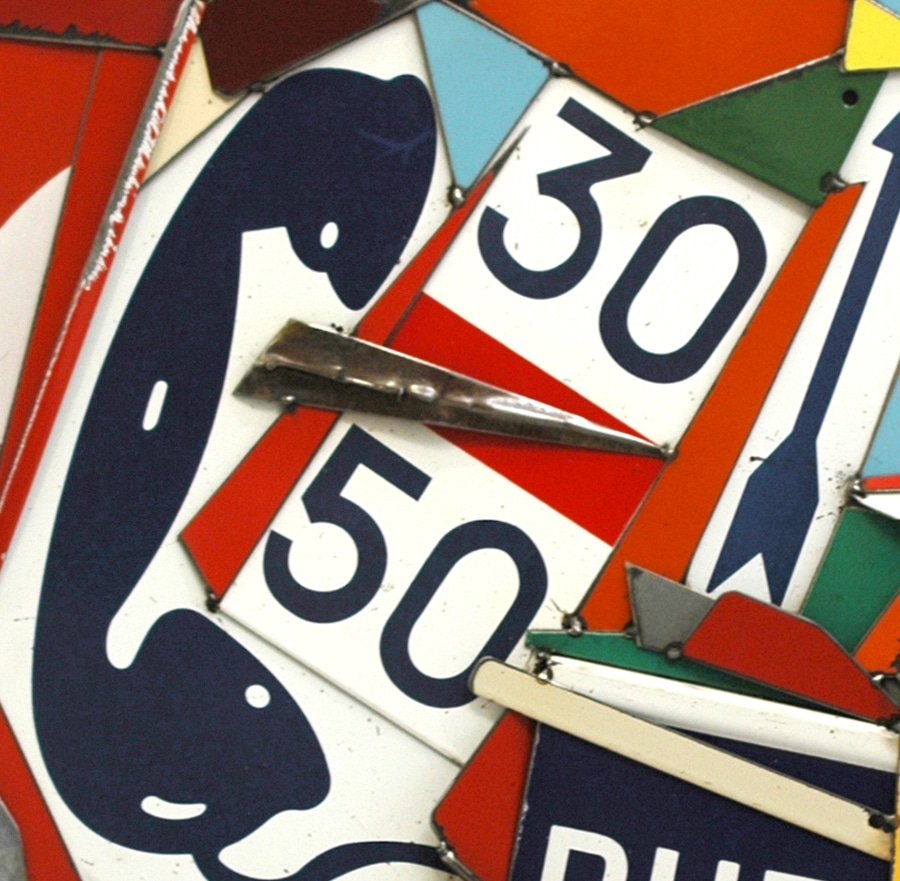 The son of a Portuguese immigrant who took refuge in Sarlat, Fernando Costa will never leave his native town and will become an emblematic figure of the small perigueux village.

Like his brothers, Fernando Costa took a CAP Hotels, which led him on board the Queen Elisabeth 2 where, as the youngest employee of the ship, he remained a steward for several years. During his crossings, he will meet different artists who will give him a taste for beautiful things. However, his first artistic encounter dates back much earlier, it was while watching a television show at his grandmother’s house at the age of 13 that Costa first heard about César. He saw the artist at work, bending cars and thought the concept was “funny”. Later, during a school trip to Paris, at the Beaubourg Museum, he came across the sculptures of the artist who had attracted him a few years earlier. Under the mockery of his classmates, Costa announces that he wants to make art like César, he will be encouraged by the guide but above all animated by the common destiny he shares with the master, both Capricorn and son of an immigrant. It is in the year of Caesar’s death that Costa will make his first pieces. However, before becoming Costa, Fernando must first find something to work on. It is during a lunch in Los Angeles, on board his cruise ship, with his best friend named César (coincidence?), that he notices an American family picnicking on a makeshift table made out of a “Speed Limit” sign. He has just found his favourite material, which he will quickly fall in love with. He returns to his village in France, his head full of ideas. He contacts the Departmental Equipment of Sarlat which agrees to give him the outdated road signs of the department. 20 years later, he works with a plethora of original signs, he recovers enamelled street signs, explores the municipal workshops, the RATP, construction sites, enamelling shops…

He likes the idea of giving a second life to pieces of metal that bear witness to their time, telling a story, having seen the inhabitants, the tourists, colourful metal signs that brighten the streets, that indicate a direction, that give meaning to life somewhere. Signs that have evolved over time, over history. If Caesar had turned to metal for lack of means, Costa’s approach is quite deliberate.

Costa doesn’t throw anything away. It is with the “offcuts” of his cut-outs that he creates his monochromes, his coloured abstractions, his explosive counterpoints… Thus, each work is linked to the other, the panels are dismembered to be better joined together, like coloured skeletons filled with history, inspired by the chain processes of industrial factories, where one task does not work without the other.

The creative process follows precise assembly steps that Costa carries out with the precision and speed that only experts are capable of: after receiving the panels he first cuts them, using shears, cuts out pictograms, builds shapes, isolates words. He first polishes the pieces that have become sharp and then places them one next to the other until the right composition and colour balance is obtained. Once satisfied, the pieces are welded on sheet metal and polished one last time to make the work perfectly sound. Eventually, Costa applies a coat of spray varnish when aesthetically pleasing, which he lets dry.

This is an important railway job that Costa is doing alone. Due to his very physical daily routine, Costa is given a monthly cervical and lumbar recovery that is severely tested by the weight of the shears and the bending of the metal.

Costa doesn’t stop at lying sculptures. These upright sculptures, mounted from several angles, are characterized by their compositions of laser-cut pictograms from the 1950s and their cobalt blue color recognizable from afar. Once the pieces have been welded together, the sculpture is put in the oven at 200° for 30 minutes with a layer of white. When the piece has cooled down, the blue is applied to the still hot sheet metal which will expand it and spread it at the ends. Then the second firing at 200° lasts one hour.

Costa has the ideas and the material, he still has to learn the technique. It is in an ironwork workshop in Souillac that Costa goes to learn the trade with René Peyllod. In addition to physical strength, railway work has to be carried out meticulously and diligently. Following his training, Fernando rents his mentor’s henhouse, which he transforms into a workshop. Soon, he cannot afford to pay his rent or even feed himself.

For eighteen years, convinced of their protégé’s talent and his extraordinary destiny, René and his wife will graciously lend their workshop and offer Costa a hot plate every day.

Although inspired by Caesar, he doesn’t follow any movement, or else he mixes them up. For 8 years, Fernando sells nothing. It is during an exhibition in a retirement home that a resident gives him the contact of her grandson who is in the art world. He will make him enter the Grand Marché d’Art Contemporain de la Bastille in 2005. In 50 minutes, he sells the twenty-six paintings on display and sees his life turned upside down. It is on this same day that he will meet various gallery owners and in particular Stéphane Bou, who has remained faithful to him today.
In 2013, he is the 18th artist in the world to be appointed to create the “Art Car” of the 24 Hours of Le Mans. He succeeds Warhol, Calder, Jeff Koons, Arman and of course César. Produced in two months from the podiums of motor racing, Costa’s Art Car weighs over 500 kilos.

Costa stay humble. He wants to make contemporary art accessible to everyone and is happy to open his studio to anyone who wishes to do so. He buys a black Porsche but he thinks it looks “stupid” inside. He finally decides to cut it up to make 20 paintings that will be exhibited in Montauban in June 2019. The dismantling is scheduled for January 2020 and will be the subject of a film.

25 kilometres from Sarlat, Costa knows another refuge; the caves of Lascaux IV. He often goes there on pilgrimage and became friends with André, the director of the place. Costa likes to recharge his batteries near the stones, full of history and past. He is currently preparing a project in connection with the prehistoric site planned for 2020.

He has also had a constant exhibition at the Art Jingle Gallery for the past 17 years.